For years, social scientists have been working to better understand why individuals in some communities are more likely to climb out of poverty than in others. Researchers have studied a wide variety of potential factors, including early childhood health interventions, elementary school improvements, and job training programs. According to innovative work by the research group Opportunity Insights, the strength of an individual’s social network and community may be the most important factor in helping us understand upward economic mobility in a community.

To better understand these factors – and ways in which communities can help facilitate greater economic opportunity – the researchers analyzed privacy-protected Facebook data and studied the interactions and social networks created among individuals. One of their key takeaways was they found social networks across the country tend to be highly segregated by income; in other words, higher income people tend to have higher income friends. On the other hand, in those communities where low-income and high-income individuals interact and form networks together, children are more likely to rise out of poverty and earn higher incomes than their parents as they reach adulthood. In fact, the researchers found that “economic connectedness,” a term which we will likely hear more often in the years to come, is the single strongest community predictor of economic mobility identified to date, even surpassing factors such as racial segregation, economic inequality, educational outcomes, and family structure.

According to the recently published Social Capital Atlas, Cheshire County and Hillsborough County exhibit a very high degree of economic connectedness (i.e., the degree of interaction between high- and low-income earners) when compared to the rest of the country. Sullivan County also ranks in the top ¼ of counties in the United States. This finding may suggest greater opportunity in our region for young individuals to rise out of poverty and/or earn higher incomes than their parents. The researchers found that more than half (53.8%) of the friends of low-income people (i.e., those earning below the median income by block-group) have high-incomes in Cheshire County, while Hillsborough County is close behind at 52.7%.  This places Cheshire County in the 92nd percentile, Hillsborough County in the 90th percentile for economic connectedness when compared to other counties in the nation. Sullivan County, while still high (77th percentile), ranks slightly lower than the other two Southwest counties. 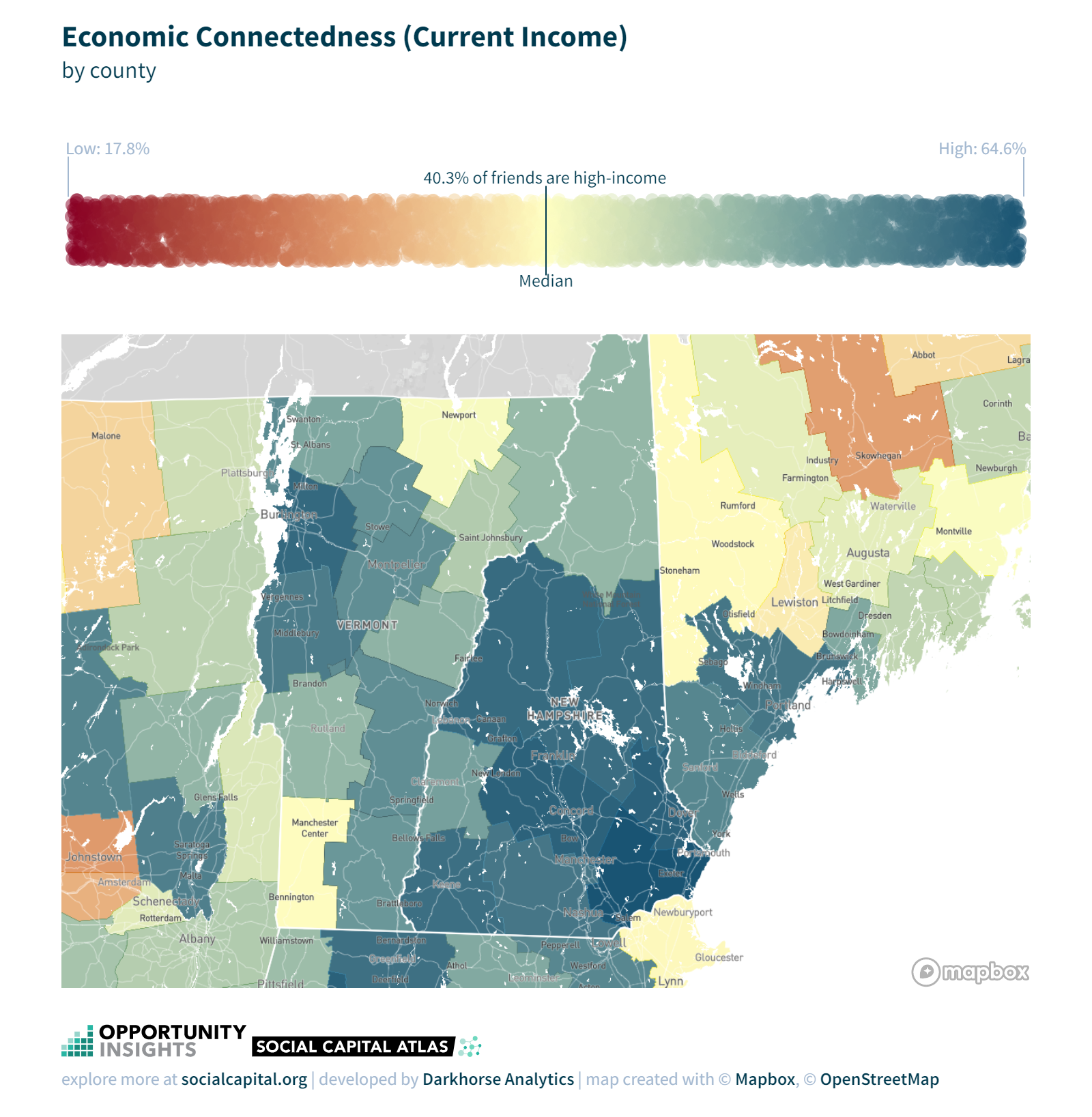 When looking at economic connectedness by ZIP code, the communities of Rindge, Peterborough, and New Ipswich (ZIP codes 03461, 03458, and 03071) exhibit the highest degrees of economic connectedness, all within the 97th percentile. Many ZIP codes within the region unfortunately do not have available data due to low population, but all of those that do rank above the median (i.e., 50th) percentile. 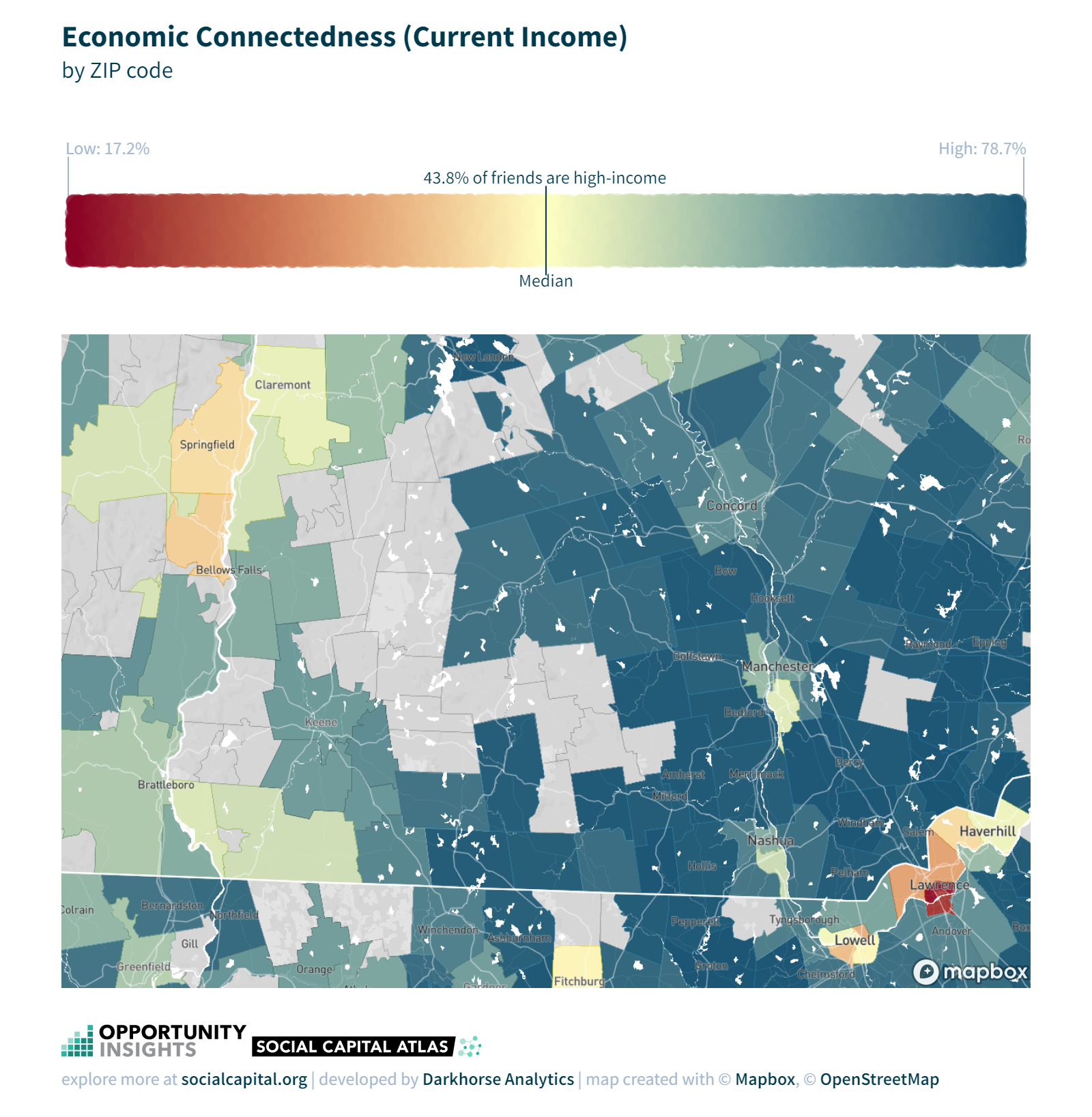 Notably, however, while Southwest NH counties exhibit high economic connectedness, they rank much lower in terms of upward income mobility:

Why would this be the case, if an economically connected area is the best single indicator of greater economic mobility, as the researchers suggest? Why aren’t children in poorer families rising out of poverty at the rate one would expect, given our counties’ comparatively high level of economic connectedness?

One consideration is that while economic connectedness is high, Southwest NH counties appear to have a high “friending bias” compared to other regions included in the study. In other words, people with low and high socioeconomic status are relatively well integrated in schools and neighborhoods, but tend to befriend each other lower rates. According to Chetty et al., this appears to be a general trend in the Northeast compared to other areas throughout the country. In contrast, the Midwest and Great Plains have the lowest levels of friending bias. 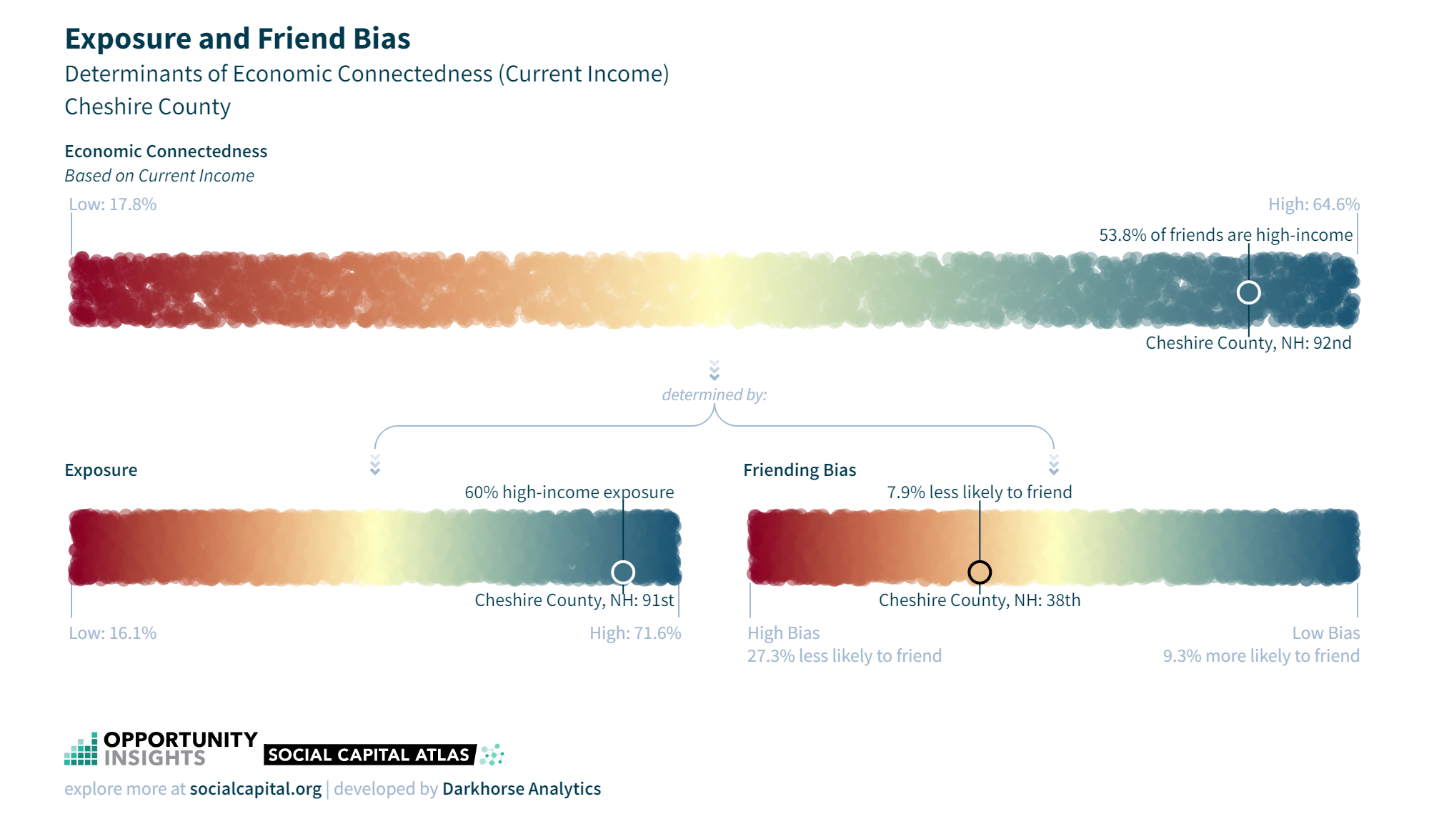 According to the researchers behind Opportunity Insights, there are potential initiatives which may lead to reducing friend bias among people of different income groups, despite a high level of exposure already being present: (1) changes in group size and tracking; (2) restructuring of space and urban planning; and (3) new domains for interaction. Examples include:

A Strategy for Southwest NH